Why Does Digital Infrastructure Matter?

According to several studies, Indonesia is slated to become one of the largest digital economies in Asia. Indonesia’s internet economy would likely reach $146 billion in value by 2025 from an estimated $70 billion this year, boosted by growth in e-commerce and an open regulatory framework supportive of digital financial services. The Covid-19 pandemic has accelerated digital adoption in the country, with 21 million people, mainly coming from nonmetropolitan areas, becoming digital consumers for the first time. (Google, Temasek, and Bain & Company, 2020).

Today three in four Indonesian use the internet. That is roughly equal to the country’s entire adult population. There are 196 million Indonesian internet users in 2020, or 73 percent of the population, growing from 171 million in 2018 (APJII, 2020). That translates to roughly 1.400 new people getting online for the first time every hour.

Still, the questions linger on how the county would build enough digital infrastructure and muster sufficient capability to support the transformation. The digital infrastructure encompasses everything that made includes not only wide arrays of hardware and physical networks like Internet backbone broadband but also the rules and regulations, the talent pools and

Indonesian internet consumption is blessed with one of the lowest data prices in Southeast Asia. But that is also a curse as it comes with the slowest internet speed in the region. First of all, Indonesia’s international bandwidth is small compared to its internet users’ size Many multinational companies depend on mirror servers in Indonesia to increase perceived speed. The domestic bandwidth problem has mostly been taken care of for the next few years, with the government completing laying undersea cables for its Palapa Ring project more than a year ago (Jakarta Globe, 2019).

Still, that leads to the second problem, the last mile problem. Only a fraction of Indonesia’s households have fiber optics, and most cities in Indonesia do not have the fiber optics infrastructure yet.

Thankfully, recent investments have allowed users of all five major mobile operators to connect to the 4G network 90 percent at a time (Opensignal, 2020), compared to 35 percent five years ago (McKinsey, 2016).

It is on the side of soft infrastructure for the digital economy that Indonesia lacks. With most of its working population not having higher education than junior high school, digital talents are hard to come by. That may hinder the availability of support services necessary to maintain the digital industry.

Secondly, digital security and privacy are growing issues in the country. While hoaxes and slander cases dominate headlines, online fraud accounts for most crimes in digital space in the past five years. The National police cybercrime data showed there are four fraud cases for each defamation case in the country. The police’s digital space capacity was also abysmal, with only half of the issues resolved. (Patroli Siber, 2020)

In the regulatory space, the government’s support was apparent. The country already has a law regulating electronic transactions (UU ITE). The House of Representatives is set to discuss privacy law this year to plug the UU ITE hole.

The 2020 Law about Job Creation (Omnibus Law) also provides some leeway to network operators to join their network, allowing for a more efficient CAPEX. The law also opens up a frequency spectrum previously reserved for analog TV for broadband services.

What is digital infrastructure?

The productive use of inf rastructure can reduce global inf rastructure costs by 40 percent, or $1 trillion annually, boosting economic growth by 3 percent or more than $3 trillion by 2030. (Bailey et al. 2014).

In its broadest definition, infrastructure describes the interconnectedness of organizational structures that enable society to function effectively. Infrastructure is also defined as all material, institutional, personal, and data infrastructure available to economic agents that contributes to the realization and equalization of comparable inputs’ remuneration. (Jochimsen 1966)

This paper analyzes both ‘hard’ and ‘soft’ infrastructure. These are the physical systems required to run a digital economy. It is the digital infrastructure that enables the reach to last-mile users (the end-users). Human capital is used to deliver services and complements hard infrastructure. 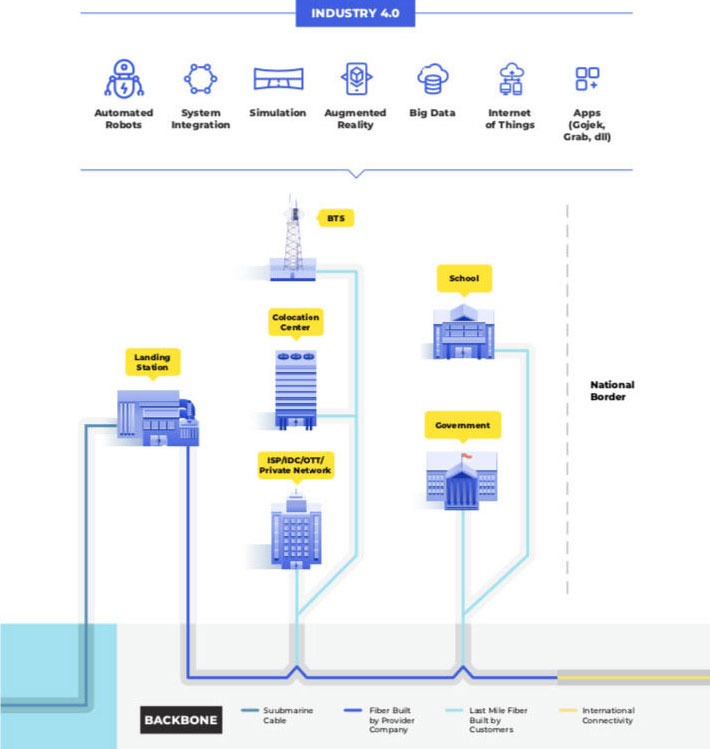 The paper is structured as follows: Section 2 discusses the hard infrastructure; Section 3 outlines the digital skills and their role in digitalization; Section 4 provides conclusions and policy recommendations.